Winners of the Blank Parchment 2015

The 41st edition of the Disfida dei Trombonieri ended on 5 July 2015 at 10:30 p.m. with the proclamation of our association as the winner of the Blank Parchment. 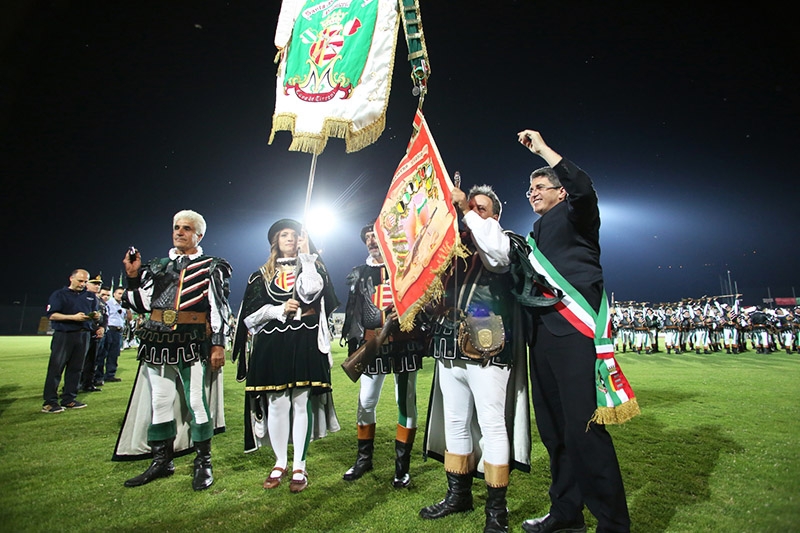 The most awaited event of the 4th Renaissance Week, the Disfida dei Trombonieri, the unmissable event of every inhabitant of Cava (Cavese) and collector of the consents throughout Italy, took place on Sunday 5 July for the 41st time.

Held quicker than the previous editions, the Disfida of this year started at 7:30 p.m. with the exhibition of Sbandieratori Cavensi, followed by the extraction of the optimal time shot. After a 90 seconds time chosen for the two previous editions, this year a 80 seconds time had been chosen. The event continued with the challenge of shot. The eight associations of pistonieri ensued on the firing line, according to the order drawn the day before at the Duomo during the historical parade: Sant’Anna all’Oliveto, Santa Maria del Rovo, Senatore, Borgo Scacciaventi-Croce, Filangieri, Sant’Anna, Santissimo Sacramento and Monte Castello. The jury isolated from the public in order to study the reports. In the meantime the public had been entertained with the exhibitions of Sbandieratori Città de La Cava and Cavalieri della Pergamena Bianca, completing the framework of the associations belonging of the Associazione Trombonieri Sbandieratori e Cavalieri di Cava de’ Tirreni, the organiser of the event.

After a brief speech made by the new mayor Vincenzo Servalli, the presenter of the evening Antonio Di Martino, at 10:30 p.m. proclaimed the winner Casale: District Pasculanum, Casale Santa Maria del Rovo!

The news is scouring the seas through the television broadcaster RTC Quarta Rete, which curated the live recording.